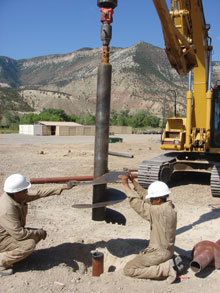 With our state-of-the-art testing and installation monitoring equipment, take no chances!

You told us, “it sounds great, but prove it…”

Alpine Site Services has taken engineered screwpile technology to geo-technical and structural engineers. The response was that it sounds great but load testing was needed to prove it. In the past, load testing was a time consuming (beam and crane rental, all the thread bolding beams together, etc.) and expensive process that cost $15K to $30K per test.

Alpine Site Services has developed a portable, computerized load testing trailer unit with the ability to test up to 800 Kips. The unit also monitors movement to the thousandth of an inch while recording both stability and load on the pile and graphing both at the same time. We can usually begin testing within hours of site arrival compared to the days it used to take just to get set up.

Through our own research and past studies by others, Alpine has established a direct relationship between torque and engineered screwpile bearing capacity. So if the production screwpile is installed to the same torque as the test pile, the bearing capacity will be relatively equal. 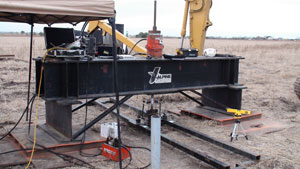 In the US Army Corps of Engineers on pile foundation designs, it states the following: “When the design is verified by pile load test, the pile load test will take precedence in the selection of ultimate pile capacity and pile tip over the predicted theoretical values…”

Alpine Site Services has also developed a computerized method to monitor and record the torque of the pile during the installation of the screwpile. All test and production screwpiles are monitored and recorded to ensure the quality of the installation of the screwpile.Once captured, the data is e-mailed, printed and distributed to engineers, owners, and contractors for their records. Alpine has patents pending on the testing and monitoring equipment and has already sold their testing and monitoring equipment to installers in other countries.